Recently in, Inquiry Part 1: a Tale of 3 Inquiries, I presented a framework for thinking about inquiry from three perspectives:

Now this is not a new framework- The National Science Education Standards (1996) challenge us to consider three perspectives of inquiry: the teaching strategies that support student inquiry, the abilities of inquiry, and the understandings of inquiry. This is essentially what I’m promoting in these posts.

Today’s post will dig deeper into perspective 1- The Knowledge and Skills of Inquiry. Another way to think of this is the Content of Inquiry promoted by our national standards and most state science standards. We want students to know some things about scientific inquiry and to be able to do some things to demonstrate that knowledge. In our National Science Education Standards we see the following standards:

By the end of eighth grade, all students should have developed the following abilities of scientific inquiry:

The recent Standards_Framework_Preliminary_Public_Draft (NRC July 2010) describes the following practices of scientists and engineers. While the section does not refer to these as “inquiry”, (the word inquiry is far from ubiquitous in this document by the way) these are commonly the skills we want students to demonstrate:

While our standards documents provide examples of what we want students to be able to DO.. it seems like something gets lost in the “taking apart” of inquiry. When we try to isolate the skills and abilities of inquiry we tend to over-simplify or send the message that “doing these discrete things = inquiry”. And that is not always the case. My reason for writing this series is to promote a more overarching understanding of inquiry from these three perspectives. I think that we as educators need to have a more holistic understanding of scientific inquiry before we can be successful in teaching kids how to make scientific observations and use evidence to critique a claim. 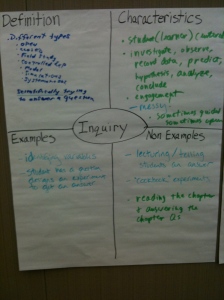 I conduct a lot of professional development on inquiry with adult learners and I typically start with uncovering the participants’ initial ideas about inquiry. I will sometimes use a Frayer Model (see example left) or have folks list the characteristics of inquiry. Regardless of the strategy I use, the results are typically the same. Inquiry is defined by terms such as: hands-on, questioning, open-ended, student-centered, messy, noisy, and authentic. Now don’t get me wrong- I’m not saying these are incorrect- I’m just saying that for many of us, our initial ideas about inquiry are incomplete.

For example, I don’t think I’ve ever worked with a group of adults where QUESTIONING was not a major theme. However, I have rarely (if ever) worked with a group who presented EXPLANATIONS and EVIDENCE as themes. Somehow we are all over the questioning part of inquiry but we tend not to think as much about the claims, evidence, and reasoning part.

Inquiry and the National Science Education Standards: A Guide for Teaching and Learning (2000) presents Five Essential Features of Classroom Inquiry (see below).

Notice that questioning is obviously important (the word questions is mentioned in statements 1-3) but also notice that evidence and explanations are central to statements 2-5. Inquiry is about answering scientific questions using evidence-based explanations.

The following list is not meant to be exhaustive- I will add more and hope to get some recommendations of other resources from reader comments: